But only Newark has the Ironbound with nearly 200 Spanish, Portuguese and other restaurants. The Ironbound is detailed in my Essential Jersey Experiences story.

And the city is home to several Jersey food legends, including Calandra’s and Dickie Dee’s, as well as great, inexpensive eateries.

Here are a selection of my favorite Newark spots, from bakeries, sub-shops and food trucks to Mexican and Portuguese restaurants. Many of the locations are within walking distance of Newark Penn Station.

Got a favorite Newark spot that isn’t here? Let me know!

What more comforting food message than the “Hot Bread Every Hour” neon sign at Calandra, right on Bloomfield Avenue?

There are bigger, shinier Calandra stores in Fairfield and Caldwell.
But you should go to the Newark location, which was opened by Luciano Calandra in 1960. Excellent bread, pastries, donuts, cakes and more. 204 1st Ave., Newark; (973) 484-5598.

And Dickie Dees (see entry below) is just a short walk away.

“On the street that wants to survive,” read a message on Jerry Ley’s Torsu food truck with Cambodian cuisine, located downtown.

In earnest; Ley ran a Cambodian restaurant in Brooklyn for 13 years that had been relocated due to sky-high rents, and then ran into trouble with his landlord in his new Manhattan location.

Ley left New York and started a truck in downtown Newark. Losing the big city is our gain. Cambodian food is Thai, with a taste and flair all of its own. Try the # 15 Chicken or the Cambodian Chef Salad.

The truck shuttles between the Rutgers / Newark campus, Washington Park, and other downtown locations. Repairs are being made at the moment. Check out Twitter @camcuisinetorsu for updates.

The best Newark food news I’ve heard in a while is the opening of the Monk Room downtown.

The Neapolitan-style pizzeria, due to open on Friday January 10th, is owned by the people behind the acclaimed Porta in Asbury Park. The seating capacity is 50 people and there are four pizzas on the menu. plus homemade pasta; Salads, sandwiches and desserts.

When you go online, most of the mentions of the Newark legend Dickie Dees are from Dickie Dee’s Pizza, which misses the point.

They go to Dickie Dee for the Italian hot dogs and the theater – the dogs sizzle
in hot oil; the small, economical decor; the uninterrupted procession of police officers, firefighters, paramedics and local characters.

Get a double Italian hot dog when you’re really hungry and don’t care about the inevitable spike in your cholesterol. Don’t look for a website. Dickie Dee doesn’t do the internet. 380 Bloomfield Ave., Newark; (973) 483-9396.

Hamburgao is Portuguese for “big burger,” and the burgers at this Brazilian fast food stop live up to their name. Leave the stereotypes of the American burger chain at home. Burgers here are jammed with beef, corn, lettuce, mayonnaise, mozzarella, egg, bacon, carrots and potato sticks, among other things.

There is steak, cheese, fish and other sandwiches, empanadas and pastries. But start with a burger. You may never see hamburgers like this again.
288 Lafayette St., Newark; (973) 465-1776.

Find out how Hamburgao holds up against other burgers in a Munchmobile burger showdown.

Forget the look of Heaven’s Delite – It is a walk-in counter – or the surrounding area, right next to RT. Exit 78 Elizabeth Avenue. The best soup in Newark comes from this airplane jane place popular with city cops, city workers, and even dock workers from nearby Port Newark.

Former co-owner Clayton Wade started the business as a food truck in front of the university hospital. The shop is now run by other members of his family. The chicken and veggie and chicken noodle soups are incredibly stomach-friendly, and the turkey chilli is superb. All soups are very hearty and filling.

Here is my video from Heaven’s Delite.

It’s a hole in the wall, but the steady stream of customers to Hero King proves they’re doing something right. One block from Penn Station, the no-frills sub-shop has been open for over 40 years.

The submarines are good, full and inexpensive. When you’re starved, attack the Bigfoot, a sandwich filled with every meat and cheese available. 406 Market St., Newark; (973) 344-2322.

The former charming atmosphere has recently been refurbished, but the bar still attracts a lively crowd and these burgers stay great.

The lunch special for $ 5.99 includes a large main course, plus rice and vegetables. Good luck to top that everywhere. I like the cubano sandwich and the pan con lechon (marinated roast pork and toasted bread). There are only a few tables so prepare to wait or make something to take away. 7 Central Ave., Newark; (973) 621-9090.

The Ironbound doesn’t just consist of Spanish and Portuguese restaurants. If you’re in the mood for Mexicans, look for the Comida Tradicional Mexicana sign outside of Mi Pequeno Mexico. 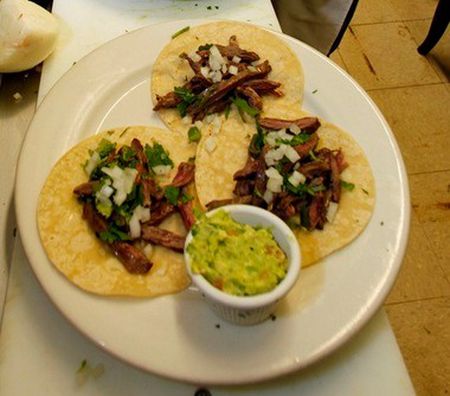 It’s not by the numbers chain-Mexicans; The mole Poblano, the thick, rich chocolate sauce from Puebla, gets new sizzling and spices with hot peppers and other spices.

The enchiladas are a surprise in the south of the border – the addictive red guajillo sauce made from the leathery red-brown chilies of the same name separates these enchiladas from the pack.

Here is my Eat with Pete review from Mi Pequeno.

There are dozens of Portuguese and Spanish restaurants on Ironbound; How do you choose just one? I was disappointed with the better known tourist restaurants. My current favorite is Seabra’s shellfish.

The name “marisqueira” means fish restaurant – says it all. The open kitchen – flames blaze, steaks sizzle, cooks throw each other out of the way – makes for great theater.

To take it all in, take a seat at the bar or in the front dining room. There is a quieter rear dining room. Try the squid in vinaigrette sauce, the whole red snapper, or the seafood paella. Meat lovers won’t go wrong with the grilled T-bone in garlic sauce. 87 Madison St., Newark; (973) 465-1250.

It’s not Newark, but East Newark, home to Tops Diner, is right across the river.

Tops, miles of best diner, came second in my Jersey Diner Showdown for Inside Jersey magazine. It has been open since 1972 and has a shiny silver-blue facade and beautiful cabins.

The menu is huge, even by diner standards; There are 32 types of burgers and 27 fish dishes. The take-out counter in the entrance area processes take-away orders quickly and efficiently. The meatloaf? It’s the best I’ve ever had in a diner. 500 Passaic Ave., East Newark; (973) 481-0490.

The results of our unparalleled Jersey Diner Showdown can be found here.

“We’re a dump”: Newark residents hope to fend off a brand...

The newly listed Newark Home is near hiking trails