The 7-year-old boy, who died in a house fire in Newark last week, had an “old soul” for such a young child, his great-aunt recalled.

Saahir Keiron Hartfield wore new sneakers and a durag to a birthday party for a year and came outside to show his great-aunt the outfit. She stared at her cell phone instead, so he stomped his feet to get her attention.

“He just put his hands on his hips and said, ‘Check out my outfit,” said Kamilah Richardson of her nephew.

Saahir died early that morning in a house fire that broke through a three-story house on Astor Street Thursday, authorities said. His body was found on the third floor of the house and his father tried re-entering to get his son through the roof, said Brian O’Hara, director of public safety for Newark.

His mother, father, and siblings aged 1, 5, and 11 were rushed to the university hospital, Richardson said. As of Tuesday, she added, they were all released.

“You have a very close, close family,” said Richardson. “So this is a difficult pill to swallow.”

A 7-year-old boy died in a house fire on Astor Street in Newark on Thursday, April 8th.Newark Department of Public Safety

The family lost all of their belongings in the fire. Richardson started an online fundraiser to help cover the cost of Saahir’s funeral expenses, clothing, and food. According to the fundraiser, clothing donations can also be given to a family member in Carteret.

Family and friends stood in the rain on Sunday afternoon to hold a candlelight vigil in the house. Balloons and stuffed animals were left on the front stairs.

Saahir always complimented others and was very close to his other siblings, Richardson said. He was a fan of wrestling and a first grader at Philip’s Academy Charter School in Newark, she said. 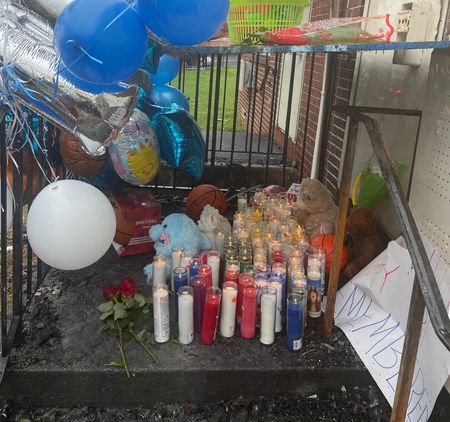 Family, friends and residents held a vigil for Saahir Keiron Hartfield in the Newark home where he died on Sunday, April 11, 2021.Courtesy of Kamilah Richardson

“I just want everyone to know they were a breath of fresh air,” added Richardson. “He was just full of life and always wanted to have fun.”

A spokeswoman for the Essex County Prosecutor’s Office said Monday the cause of the fire is still under investigation.

The Newark TSA team is committed to helping the community with...

“We’re a dump”: Newark residents hope to fend off a brand...

Newark residents, more than 40 groups, are calling on Governor Murphy...

Where to eat at Newark Liberty Airport when the journey starts...