NEWARK, NJ – It was a spring evening in June and Faa’Tina, an 8-year-old girl in Newark, was celebrating her birthday in Washington Park. With a face mask, she posed for a photo in front of a large gray concrete slab at the foot of a Christopher Columbus statue.

And in that moment it became art.

Faa’Tina’s story is just one of many told in a wave of inspiring new public murals in Brick City. These include allusions to greats and legends such as Sojourner Truth, Whitney Houston and Ntozake Shange as well as topics such as racism, xenophobia, representation and the “invisibility of black girls” in the USA.

“We live in an era that requires public art to represent the diversity and dynamism of the communities in which it is created,” said Salamishah Tillet, director of New Arts Justice.

“To celebrate this moment, Newark artists are working on murals and monuments that reflect who we are, reinventing the vibrant possibilities of who we can be as a city and a nation,” added Tillet.

The new wave of murals has received a huge boost from Mayor Ras Baraka and his administration, who recently launched a public arts initiative for social justice that is helping to bring well-deserved attention to local artists.

“Our groundbreaking mural campaign isn’t just decorating our streets,” Baraka said last week. “The murals help expand the creativity of the artists who produce them, are designed to inspire our community, and contribute to Newark’s glory as the home of the arts.”

Property owners, developers and artists who wish to sponsor or collaborate on future murals in different districts in the spring of 2021 can direct all inquiries and suggestions to Fayemi Shakur, Director of Arts and Culture, at [email protected]

A BIRTHDAY IN WASHINGTON PARK

Earlier this week, a giant public mural was completed on Treat Place in the city’s Central Ward.

The artwork, titled “Will You Be My Monument,” was inspired by the removal of a controversial Columbus statue in Washington Park by the city of Newark in June.

The organization behind the mural, the Four Corners Public Arts (FCPA), is one of 40 local art groups that have received a grant from the city’s Creative Catalyst Fund.

“Will You Be My Monument” is a collaboration between writer Salamishah Tillet, designer Chantal Fischzang and photographer Scheherazade Tillet, who captured the now iconic image of the 8-year-old girl that inspired the mural.

“Black girls are our main cultural producers, community connections and influential organizers, but their contributions are seldom recognized or valued,” said Tillet. “At best, they remain invisible in our public discourse and our monumental landscape.”

“My large-format photography of 8-year-old Faa’Tina alongside the reflective typography and acrylic mirrors is a powerful intervention that challenges us all to see ourselves through the gaze of the black girl days,” said Tillet.

The story continues below

The murals are an initiative of Newark Arts and Cultural Affairs Director Fayemi Shakur, which aims to create art that “addresses the call for racial justice, equality and representation.”

One of the murals entitled “This Guiding Light” is on the McCarter Highway between Edison Place and Lafayette Street. It is a collaboration between the artist Layqa Nuna Yawar, the photographer Chrystofer Davis and the poet Jasmine Mans.

According to a statement from the City of Newark:

“The mural documents both the collaborative creative force that exists in Newark today and the collective force that manifested itself in the protests in the United States this year. Movements for black lives against voter suppression, racism, xenophobia and for social and climate justice overlapped during the COVID-19 pandemic. The same overlap exists in the work of artists and cultural workers who reflect and experience these moments: a directional light for a better tomorrow. The contents of the mural are depicted in images captured by Mr. Davis across New Jersey, a poem by Jasmine Mans and the interpreted mural composition by Layqa Nuna Yawar. “ “This Guiding Light” (photo courtesy of the City of Newark)

The second track of the # MuralsforJustice initiative, “Rise Up Fallen Fighters”, was created by artist and President of Yendor Productions, Malcolm Rolling, in collaboration with artists Andrece Brady and Hans Lundy.

According to city officials:

“The famous poet Ntozake Shange is at the center of the representation of the resilience, freedom and justice of blacks. Ms. Shange’s smiling image is surrounded by figurative symbols that were unused models of the Statue of Liberty that France donated to the United States. An affirmative quote from Ms. Shange Shange’s iconic work “For Colored Girls Who Have Considered Suicide / When the Rainbow is Enuf” can also be seen. The mural was created in collaboration with the Lincoln Park Coast Cultural District, home of Yendor’s beloved late founder Rodney. Gilbert. “

The mural is located on Crawford Street in the Lincoln Park neighborhood of Newark. 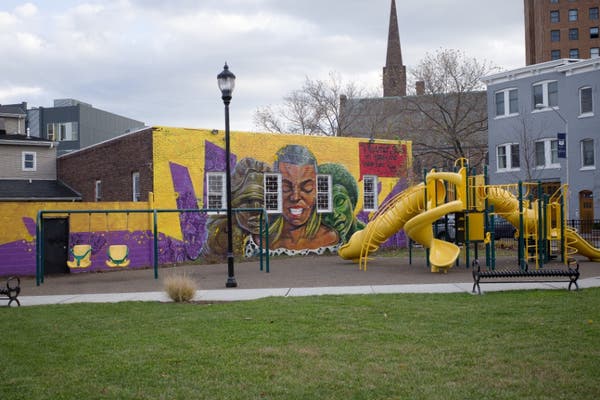 “Rise Up Fallen Fighters” (photo courtesy of the City of Newark)

In June, hundreds of people gathered to pay massive tribute to the Black Lives Matter movement on two of Newark’s busiest streets.

In collaboration with the city, a coalition of community groups and local artists rolled up their sleeves and wrote a pair of slogans with 7-meter-long letters in yellow traffic color.

The first message, “All Black Lives Matter,” took up an entire block of town on Halsey Street east of the Rutgers University campus. The second message, “Abolish White Supremacy”, was posted on the Dr. Martin Luther King Jr. Boulevard between the historic Essex County Courthouse and the Veterans Courthouse.

THE TRUTH OF THE TRUTH

It has been more than 150 years since Sojourner Truth earned a place in the history of the struggle for women’s rights and abolition. But their messages of hope and justice are just as relevant today as they were in the 18th and 19th centuries.

Now, the many truths of truth will live on in a giant nine-foot-tall work of art on Edison Place, courtesy of local artist Grace Lynne Hayne.

“I learned about Sojourner Truth as a kid in elementary school and was always inspired by her tenacity, willpower and futuristic vision,” said Haynes. “I wanted to shed light on their legacy as a reminder to women that no matter what happened in their lives, they can still have a powerful impact on society.”

A HOMAGE TO WHITNEY HOUSTON

Meanwhile, a unveiling event is planned for a one-of-a-kind mural by music icon Whitney Houston, who was born in Newark, attended Mount Saint Dominic Academy in Caldwell, and also lived in East Orange and Mendham Township.

In October, sponsors announced plans to create a 19 by 28 foot mural of Houston that features more than 1,000 pounds of hand-cut glass. The tribute will be placed at 45 Williams Street and will be placed on the facade of William House, a new mixed-use project.

Artist Maude Lemaire may be a household name to some North Jersey art lovers. She had previously been hired by Newark and Jersey City to create and install mosaic work in multiple locations in both cities.

“Whitney’s Legacy is certainly honored to have a presence in Newark,” said Pat Houston, executor of the Whitney E. Houston estate.

“This mural is a continuation of an iconic legend that will no doubt be remembered as the greatest voice for centuries to come,” said Houston.

Projects and support programs take place in the Four Corners Historic District and in the surrounding areas of Newark. CONTINUE READING: Murals fill Newark’s historic neighborhood with hope and positivity

This story is part of Patch’s Headlining Hope series, which introduces local nonprofits and charities in need of volunteers and resources. If you know of a local organization that should be profiled, contact [email protected]

Don’t forget to check out Patch Newark’s Facebook page. Learn more about how to post announcements or events on your local patch site. Sign up for patch email newsletters.

Operation Reacher officers are tracking down a car that left Newark...