In their latest volley against the expansion of charter schools, the Newark Schools Board has sued the city housing authority to recapture a former county building to be reopened as a charter school.

The lawsuit, which was filed last April but has not yet been reported, claims the Newark Housing Authority violated the terms of an agreement with the school board to sell 12 former county properties. The properties included the Maple Avenue School, a former district school that closed in 2015 and that the KIPP charter school network plans to bring back to life in the fall. The agency is asking a state court to declare the sale null and void and to return the almost hundred-year-old building to the district.

The ongoing legal battle marks a new chapter in the history of the Newark Schools. During the past decade, when the state controlled the Newark school system, state-appointed superintendents closed many traditional public schools while the charter sector expanded rapidly. Today, publicly funded but privately owned charter schools educate well over a third of Newark public school students.

But now the district is back under the control of the local school board and is run by Superintendent Roger León, a Newark Traditional School graduate who wants to stop the spread of charter schools and expand the district. He has already urged the state to close several Newark charter schools and is moving to evict a charter high school from its rented space in a county building.

Efforts to reclaim the former Maple Avenue School represent the other half of León’s plan – rebuilding the once-shrinking Newark school system.

“As the district is growing, we need school buildings,” León said early last year, a few weeks before the board of directors filed its complaint. “And of course some of the buildings we sold don’t have to be sold.”

The Newark School District is trying to regain ownership of the former Maple Avenue School building that is slated to become a KIPP charter school this fall. Courtesy KIPP New Jersey

While the district was still under state control, it transferred a dozen properties to the Housing Authority in 2016, with an agreement that the agency would sell the buildings through a public tender and return most of the profits to the district. The deal was intended to help fill a budget gap in the district by increasing revenue and removing the cost of maintaining the mostly unused properties.

In 2017, housing authorities sold the former Maple Avenue School for $ 1.2 million, less than a third of its estimated value, to a Hanini Group-controlled company. The Newark-based developer had planned to use the former school on Maple Ave. 33 to be converted into apartments. In March last year, the developer sold the significantly upgraded property for $ 10 million to a nonprofit affiliated with KIPP New Jersey. KIPP operates 11 Newark Charter Schools with more than 5,200 students enrolled.

KIPP plans to move one of those schools, the Seek Academy, from a rented space within a county campus to the renovated building on Maple Avenue. On Friday, the Seek school principal sent a letter to the families saying the school was still expecting a move despite the district’s legal efforts.

“We tried to negotiate and plead with the superintendent, but so far he has not been ready to abandon this lawsuit,” wrote Director Valerie Arroyo, adding that the “KIPP legal team are confident that the lawsuit will not derail our plans becomes.”

But she said, “The district is buying additional facilities across the city to open more schools, and we are particularly careful to restore our footprint in the South Ward,” where the former Maple Avenue School is located.

School board attorneys filed a lawsuit shortly after the KIPP-affiliated group bought the building. At that point, the board had given León full authority over the district to manage the pandemic response and raised questions about whether León had used the emergency powers to bring the lawsuit without the board’s express approval. (Deering didn’t respond to a question on the subject.)

The lawsuit, which also cites the developer and KIPP-affiliated group as defendants, alleges that the sale of the Maple Avenue building was in breach of the housing board’s contract with the school board. The agency did not include the district in the original sale and did not seek city council approval as the agreement mandates. It is also alleged that the housing authority sold the building for a fraction of its estimated value and that the agreement between the district authority did not allow the building to be used as a school. (The developer says the property was sold without restrictions.)

In a letter dated last July, the School Board’s General Counsel accused the Housing Board of “failing to perform their duties in full” in the agreement. The board of directors is demanding compensation from the housing authority and the building contractor and regaining ownership of the building.

In August, the Housing Authority filed a motion to dismiss the lawsuit. Among other things, the agency said the school board was aware of the sale of the Maple Avenue building when it was taking place, and the sale ended any right of the agency or board to reclaim the building.

The agency “is not commenting on intergovernmental allegations regarding activities that took place years ago,” Victor Cirilo, the executive director of the Housing Authority, told Chalkbeat in a statement. “We will let the legal process run its course.” 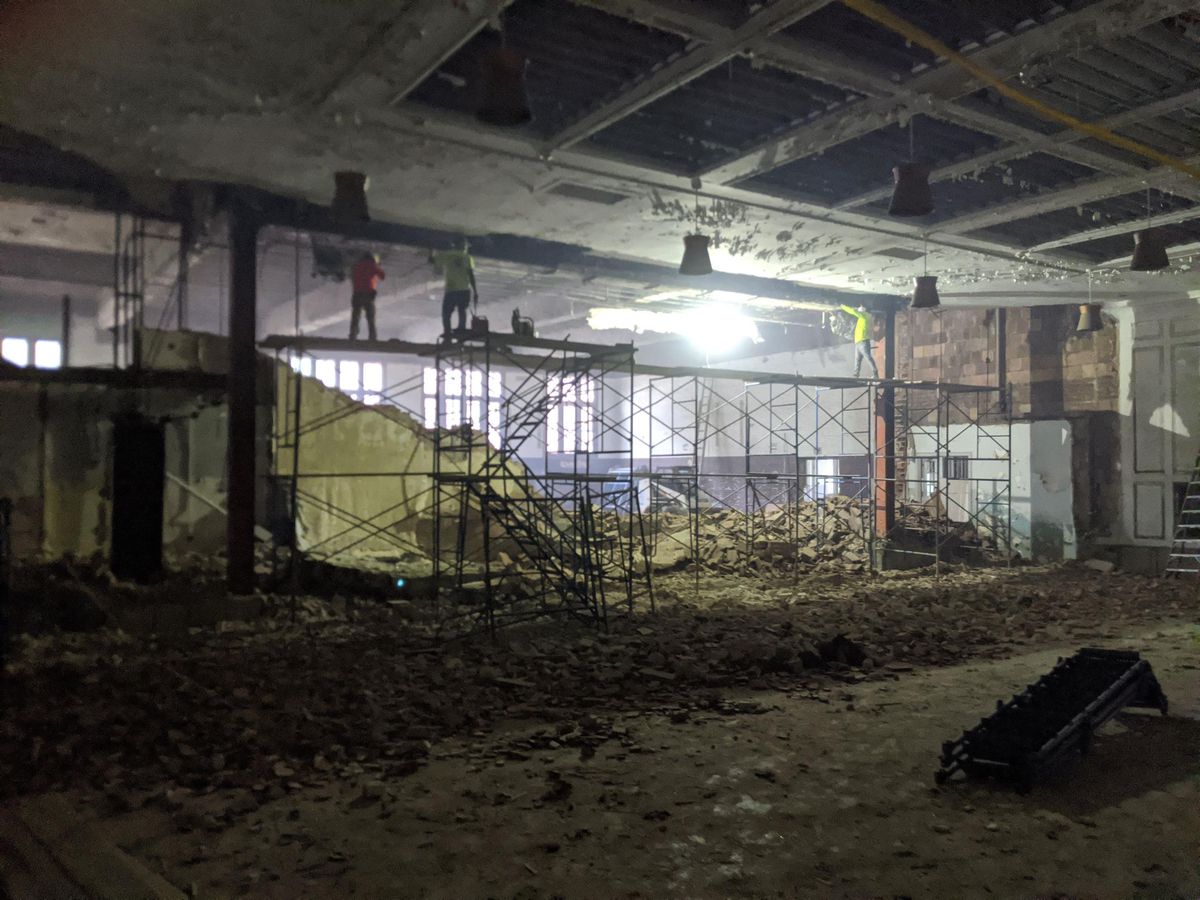 The building on Maple Avenue needed a major renovation before it reopened. Courtesy KIPP New Jersey

Hanini Group, the developer who bought the building from the Newark Housing Authority and sold it to the nonprofit organization affiliated with KIPP, is denying the claims in the board’s lawsuit, the group’s attorney said.

In particular, there were no restrictions on how the property could be used when the Hanini Group bought it, lawyer Thomas Dolan said. He added that the group had extensively renovated the building – including removing asbestos and replacing windows, roof and plumbing – which was responsible for the price hike.

“As we argued in court, we believe the NBOE’s litigation is a transparent attempt to impede the development of a new charter school in Newark,” Dolan said in a statement referring to the Newark Board of Education. He added that the lawsuit “threatens the education plans of hundreds of Newark school children planning to attend 33 Maple School this fall.”

An attorney from Friends of TEAM Charter Schools, the group that bought the building and rents it to KIPP, reiterated the developer’s argument that the property was without restrictions.

“The building, which has been vacant for a long time, has gone through a massive restoration and refurbishment process to prepare it for student reception and celebrate the history and vibrancy of the South Ward,” KIPP spokeswoman Jessica Shearer said in a Die School hopes the dispute will be resolved in time for students to begin their new building in the next school year.

KIPP plans to move Seek Academy, an elementary school, from the building it shares with two district schools to the Maple Avenue building just blocks away. A KIPP Middle School, Newark Community Prep, would take Seek’s place in the shared building.

But that plan is now in doubt – and not just because of the lawsuit.

The KIPP lease for space in the district building expires next year. The district recently offered KIPP a new five-year contract that would increase the rent, make KIPP pay utilities, and allow only one KIPP elementary school to occupy the space, according to KIPP officials, who said they are still negotiating with the county.

But last month the school board signaled that KIPP would not move a middle school into the building next to the George Washington Carver and Bruce Street School for the Deaf District Schools, which offer preschools through eighth grade. Board members said Kyle Thomas, the school principal, had “very serious concerns” about sharing the space with a middle school.

“I really think that would disrupt the culture and climate of this building,” said board member Hasani Council at the board meeting last month. Other members said the same thing, asking questions if they would approve a lease that would allow for a KIPP middle school in the building.

People who live near the former Maple Avenue School and know its long history have mixed feelings about the struggle for their future.

Rayvn Thomas, whose daughter visits Carver, said that after seeing the building stand empty for years, she is ready to bring it back to life.

“If you live in the neighborhood you don’t want to see abandoned buildings,” she said, adding that she was open to hosting a traditional school or a charter school. “If it’s good for the community, that’s the main goal.”

But Douglas Freeman, a community leader whose daughter attended Maple Avenue School, said some residents felt betrayed when plans for the building silently changed from apartments to a charter school. If it reopens as a school now, it should be owned and operated by the district, he added.

“This is our building,” he said. “We need our school back.”

The Mayor of Newark underscores the city’s efforts to narrow the...

Newark is planning a new high school that will focus on...

New Jersey should follow Newark’s lead … in that regard