(NEWARK, NJ) – Newark Symphony Hall (NSH), New Jersey’s largest black-lead arts and entertainment venue, has unveiled designs for the exterior renovation – part of a five-year, three-phase, $ 50 million project that is slated to complete The The design by the architectural firm Clarke Caton Hintz (CCH) based in Trenton, New Jersey for the 100th birthday of the venue includes a new marquee and a new street scene. Design upgrades make Broad Street – a gateway to the state’s largest city – a distinct visual marker that highlights Newark’s creativity and ingenuity.

NSH – located at 1020 Broad St. in Newark – was built in 1925 and inscribed on the National Register of Historic Places in 1977. In addition to the restoration of the building facade, the city block will be redesigned through the renovation. a central island and transport links.

“With the help of heritage conservation experts Clarke Caton Hintz and our broader project team, we will revitalize our corner of Broad Street while modernizing and honoring our historic venue, an anchor institution for the city,” said Taneshia Nash Laird, President and CEO of Newark Symphony Hall, and the only black director of a performing arts center in New Jersey. 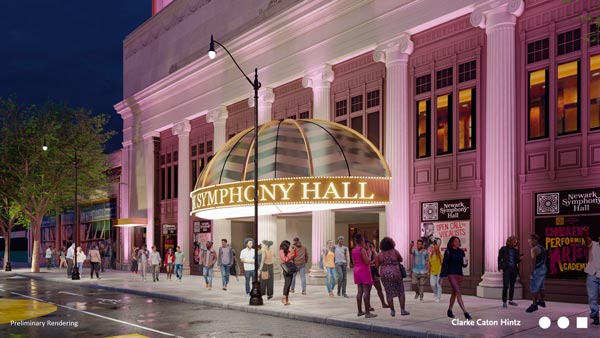 CCH’s work encompasses historical and contemporary design influences that fit the venue’s longstanding presence in the “Brick City”. In particular, the hall’s new marquee is reminiscent of the one that NSH had between the 1960s and 70s. The translucent dome will cast directional light on the building’s pillars, making it a “beacon” for Broad Street. The canopy is illuminated with LED lamps and an illuminated “Newark Symphony Hall” sign.

“Our partnership with Taneshia and the folks at Newark Symphony Hall has been wonderful, and we really appreciate the opportunity to breathe new life into such sacred ground,” said John Hatch, FAIA, director of CCH. “Our idea behind the entrance roof / dome is to see it as a delicate but bold structure, a kind of beacon that illuminates the entire entrance sequence and invites everyone to enter. The creative street scene makes the hall a collection agent and certainly one the most unique and historical attractions in the city. “

The design features also include a number of LED uplights in the floor that can be flushed from the sidewalk onto the facade. This is accompanied by new street lights with “tear-drop” lamps in front of the building – to match other sections of Broad Street.

Another outstanding design element is the “NSH Plaza” in front of the hall, which functions as a zebra crossing for pedestrians. A public works and public art component also includes large “NSH” letters on the sidewalk celebrating NSH’s art history. Each letter of the abbreviation contains a word cloud made up of the hall’s prominent musical alumni.

NSH is in an opportunity zone and expects the renovation to be funded through philanthropy, historical tax credits, and other state and federal programs. NSH is currently collecting donations for this building envelope and marquee work. The venue has hired both the Newark Landmarks and Historic Preservation Commission and the New Jersey Historic Preservation Office to oversee the project for a $ 750,000 NJ Historic Trust Grant awarded to the venue in November 2020. 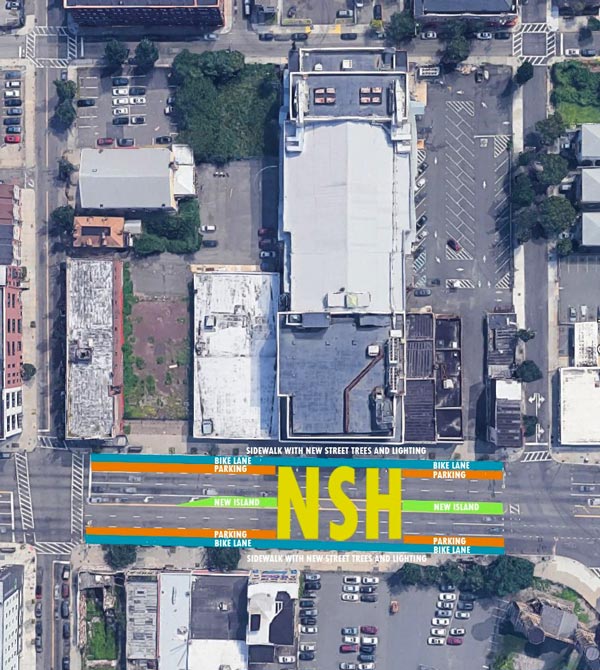 Nash Laird added, “Revealing our design is just one step to reach our final brand in 2025. Through immense determination and collaboration at the city, state and federal levels, we know this will be a monumental project that will spur job growth and engagement, especially for BIPOC artists and individuals in our great city and across the tri-state. “

The entire renovation is expected to create 500 jobs and support 50 local small businesses.

CCH is also preparing an interior plan to accommodate tenants outside of Newark Performing Arts Corporation, the nonprofit that NSH operates. As part of the five-year project, NSH will also improve the rental space by up to 50,000 square meters, including reactivating an entire floor of the hall that has been inactive for more than 30 years. Design specs also include an accessible street-level restaurant area.

Last fall NSH created a seven-member investment committee on a voluntary basis Shaping oversight policy and providing guidelines for fund management with members of Goldman Sachs, AllianceBernstein and others. Members will help the venue meet fundraising milestones, including planned renovations. In March 2021, the venue also announced the launch of The Lab, a start-up and career accelerator program for live and film screenings. The program starts with the resident company, Yendor Theater Company (YTC), in which Richard Wesley’s “Black Terror” is staged this fall.

NSH is owned by the City of Newark and is operated by the non-profit Newark Performing Arts Corporation. Symphony Hall’s legendary acts over the years have included Placido Domingo, The Rolling Stones, Amalia Rodrigues, Celia Cruz, Jimi Hendrix, Bob Dylan, and Aretha Franklin, among others. 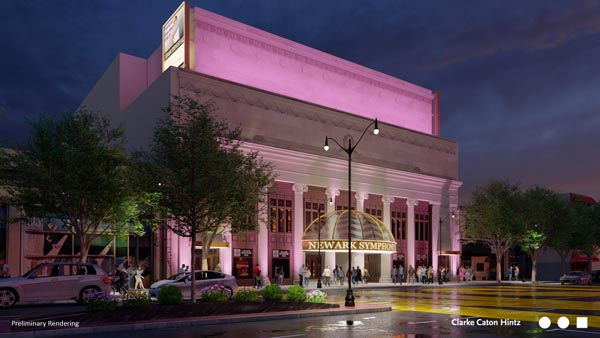 Born in 1925, Newark Symphony Hall (NSH) was home to nearly a century of art and culture in one of New Jersey’s oldest and largest arts and entertainment venues. NSH remains committed to providing art lovers of all ages with an artistically rich experience while creating career paths for people of color from around the world – and improving both the community and the Greater Newark region. In 2021 the venue will stream Black Terror for the 50th anniversary of playwright Richard Wesley. The NSH production, staged and co-produced by Richard Lawson of the WACO Theater Center, comes from the Yendor Theater Company based in their home – also the first member of the “Lab” incubator.

Clarke Caton Hintz believes that architecture, planning and landscape architecture are fundamentally interdependent – that each discipline is augmented by expertise in the other. Through the company’s multi-faceted approach, CCH works with customers and partners to create permanent architecture, livable places and sustainable environments.

Newark public schools are installing more than 4,500 Odorox air and...

Pandemic protocols change the way in which Ash Wednesday is well...