An East Newark man was one of 22 people reportedly organizing a human trafficking and prostitution organization in and around Bergen County, Bergen County Attorney Mark A. Musella said late last week.

The arrests were the result of a four-month investigation by the Bergen District Prosecutor and Chief Robert Anzilotti.

Gabriel Torres, 30, an East Newark resident, was charged along with 21 other defendants from various cities across New Jersey.

Last November, members of the Bergen District Prosecutor’s Special Investigation Team launched an investigation, entitled Operation Hope in Darkness, into a reported human trafficking, prostitution and money laundering organization operating across the Bergen District, other parts of North Jersey and in the USA operates in New York.

The investigation, according to Musella, found that 22 detainees allegedly trafficked women in Bergen, Hudson, Middlesex and Passaic counties, as well as Rockland Counties and Queens Counties, New York, for the purposes of commercial sexual acts.

Additional people have also been found to be managing and / or overseeing separate money laundering and prostitution organizations across North Jersey and New York.

The identified executives of the company allegedly secured several female victims to work for them every day. They called men up to 12 or more hours a day who advertise sexual acts to women.

The organization employed several drivers to transport the female victims to different locations throughout the day for the women to engage in commercial sexual acts. Each victim would be forced to work 12 or more hours a day and meet with 20 to 40 men during their shift.

On average, members of this organization charged $ 35 to $ 40 per 10 to 15 minute session for commercial sex acts, generating hundreds of thousands of dollars in illicit proceeds every month. This money was collected from various members of the organization.

The money was then broken down and deposited into bank accounts to avoid reporting requirements for currency transactions. Once deposited, the illegal proceeds paid mortgages and other real estate maintenance costs for several properties in New Jersey and Florida.

According to reports, the organization kept 50% of the daily proceeds while the victims received the other 50%. However, their money was often used to settle a trade debt and / or sent to sex traffickers in the Puebla and Tenancingo areas of Mexico.

In the early hours of Wednesday, February 3, 2021, more than 100 Bergen District Attorney’s Office detectives carried out 19 search warrants in the Bergen and Hudson counties and arrested 21 people.

One person is currently a refugee from the judiciary and believed to be in exile in Colombia. The BCPO says it is working with federal counterparts to locate them and extradite them to the United States.

In the course of the investigation, more than 50 women were identified as victims of human trafficking. Working with the Department of Homeland Security Victim Support Specialists and Covenant House, the BCPO is working to connect these victims with all available resources to enable them to live free from sexual bondage and abuse.

Anyone who has been trafficked is asked to call the Bergen District Prosecutor’s Office Tipline at (201) 226-5532. Services and support are available, and the BCPO says it will make sure victims are connected to the resources.

Other defendants, outside The Observer’s readership, were charged with crimes ranging from extortion, human trafficking, promoting organized street crimes, and possession of CDS marijuana for the purpose of dissemination. 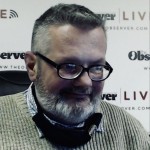 Kevin Canessa is a print and broadcast journalist at The Observer, a place he has been working on since 2006. He is responsible for the editorial content of the newspaper and website, the production of the e-newspaper, and writes several stories per week (including the weekly editorial), broadcasts live on Facebook Live, including a weekly recap of the news – and much more more behind the scenes. From 2006 to 2008 he was editor of The Observer, where he introduced the newspaper to its very first blog – which included podcasts, audio and video. Originally from Jersey City, Kevin lived in Kearny until 2004. He lived in Port St. Lucie. Fla., For four years through February 2016 and in March of that year he moved back to West Hudson to return to The Observer full time. Click here to email Kevin.

John Magaro on “First Cow” and “The Many Saints Of Newark”